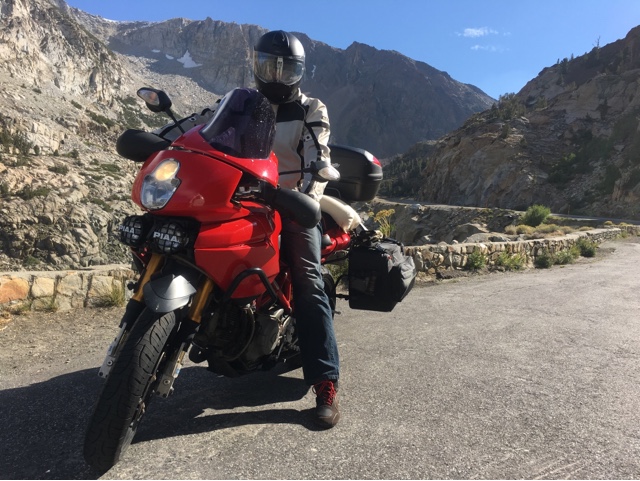 So we decided to quit our jobs and move to Hawaii.  Not the first time we’ve done something crazy, but for now let’s focus on the current adventure.  As part of our move from California, I can’t possibly pass up on my dream to ride my Ducati from coast to coast, west to east.  This is why this morning, right after returning the keys to our apartment, I picked up Octavia from work and started my trip due east.  I’ve got a whole month to do this, so no rush.  I expect it to take about two weeks and hope to see some good sites along the route.
Today was all about ditching the amazing city of San Francisco and it’s beautiful Golden Gate Bridge in favor of the spectacular remote mountains in Yosemite National Park.  We had beautiful weather along the route.  Plenty of sun and heat, just a bit chilly at the top, 9000 feet up.  My favorite part was the twisty roads at the beginning of Yosemite.  About 8 miles of absolute motorcycle bliss. At the end of Yosemite, we merged on to highway 395 and got a taste of what I think we might see a lot of tomorrow.  Big empty straight roads in large desert valleys. We got ourself a nice little motel room in Mammoth Lakes and had a most excellent burger and a few Mai Tais.  Yes, you don’t need to be on a beach to have these.  Tomorrow we take on Death Valley, but now we need to rest.
Petter on his Ducati Multistrada 1100S