We’ve been cruising in French Polynesia for almost 6 months, and loving every minute of it.

We started off in Tahiti, where after a long-ish stay in the downtown Papeete Marina we joined the Moorea Sailing Rendezvous Rally from Tahiti to Cook’s Bay (Paopao Bay). Cook’s Bay is a gorgeous deep-water bay with excellent holding, surrounded by lush vegetation. On shore it features a cute laid back cruiser friendly hotel, a couple of grocery stores, a very modern gas station, a snack place we never quite figured out the right time to get poisson cru at, and a glorious rum distillery (and juice factory, because Rum Punch). The Rendezvous festivities were lots of fun with dancing, meeting cruisers, and a paddling va’a race organized by the local canoe club. 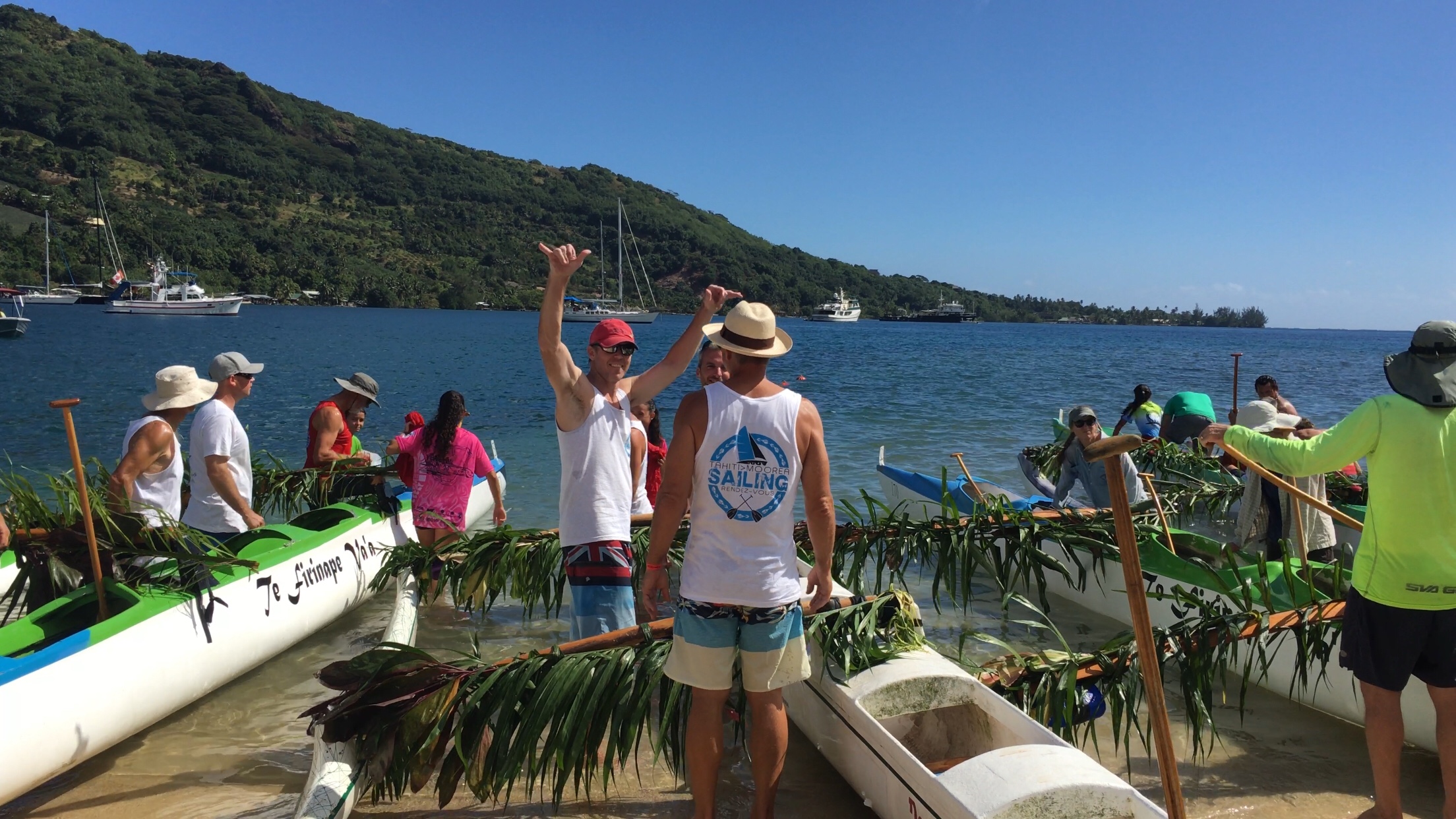 Mo’orea, which translates to ‘Yellow Lizard’, is a stunningly beautiful island popular with sailors and cruisers who make their base in Tahiti. We also spent lots of time in the shallow-water anchorage in Opunohu Bay enjoying swimming, free diving, paddling, and hanging out at the public beach park. 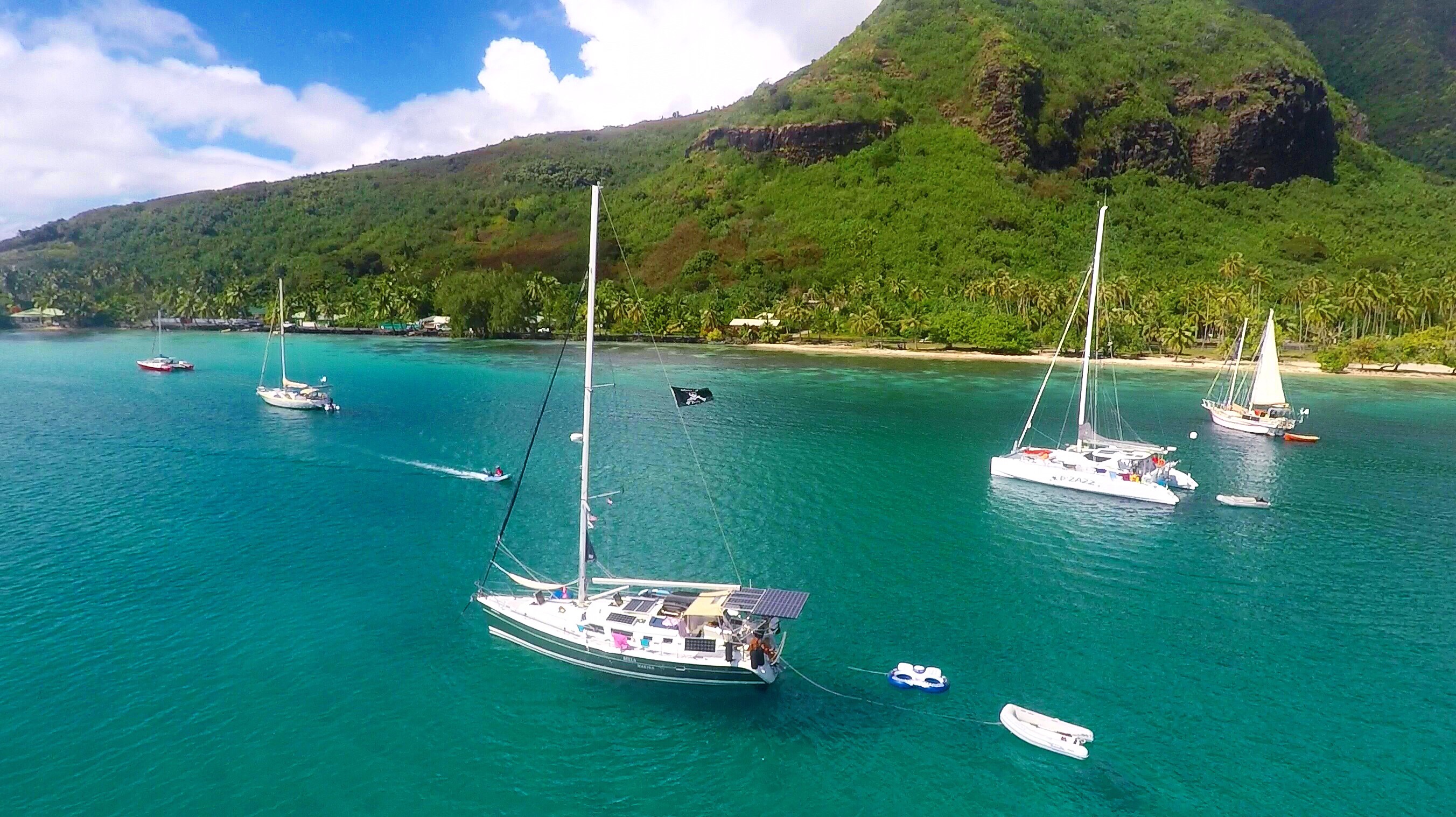 We experienced our first Mara’amu, the local name for the local weather phenomena during the months of June through September, characterized by re-inforced high trade winds, rain, and more winds. It brought some crazy gusts and a deluge of rain, but like everything else here the system passed fairly quickly and the sun shone again. 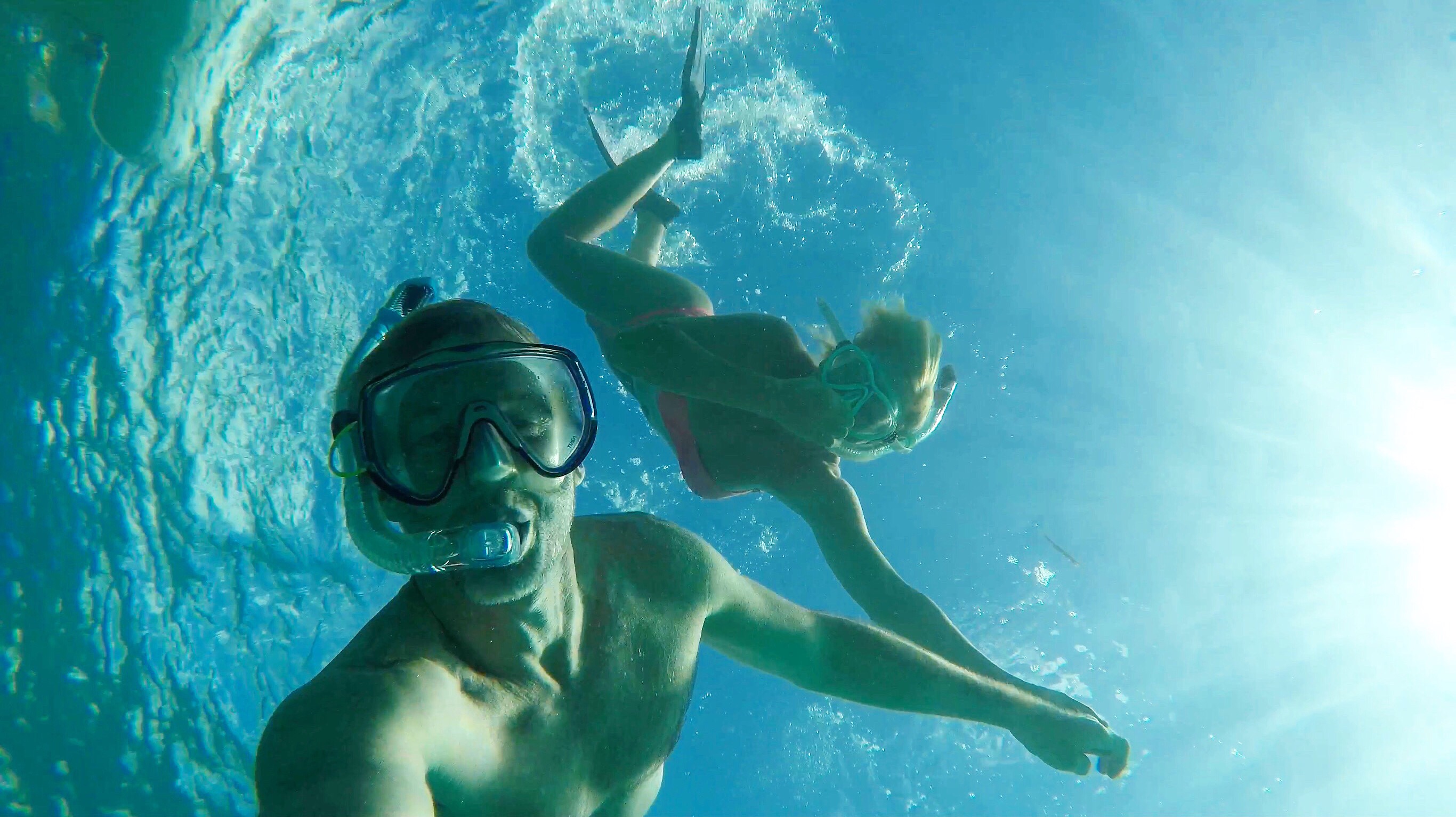 We highly recommend touring the island, both by car/land tour guide and with one of the lagoon tours, which usually include sting ray and shark feedings and yummy BBQ’s on white sand palm winged motu’s. We learned how to open coconuts and make poisson cru the local way.

We also took the opportunity to swim with whales while they were still in the Archipelago, which was an incredible experience. 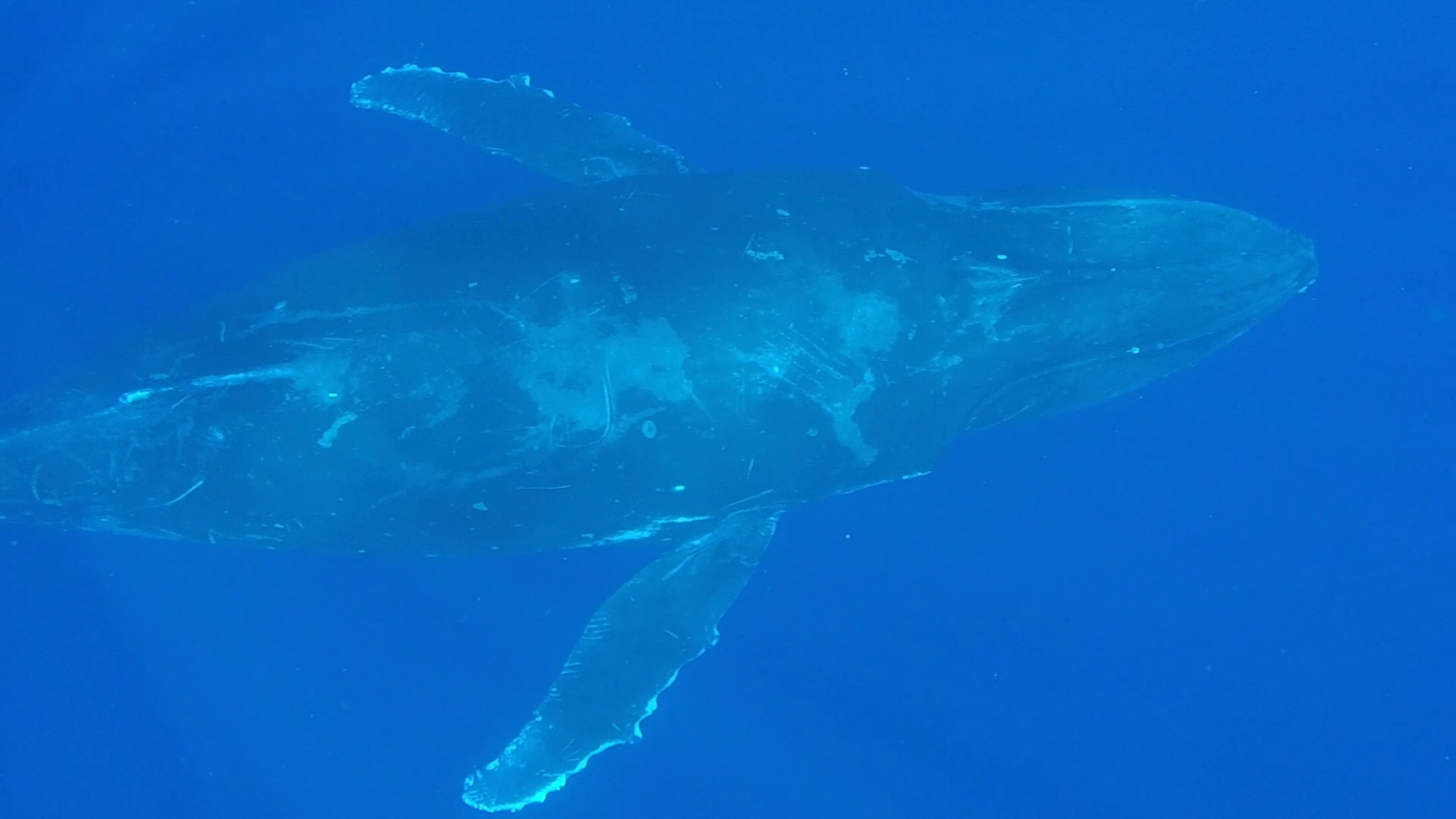 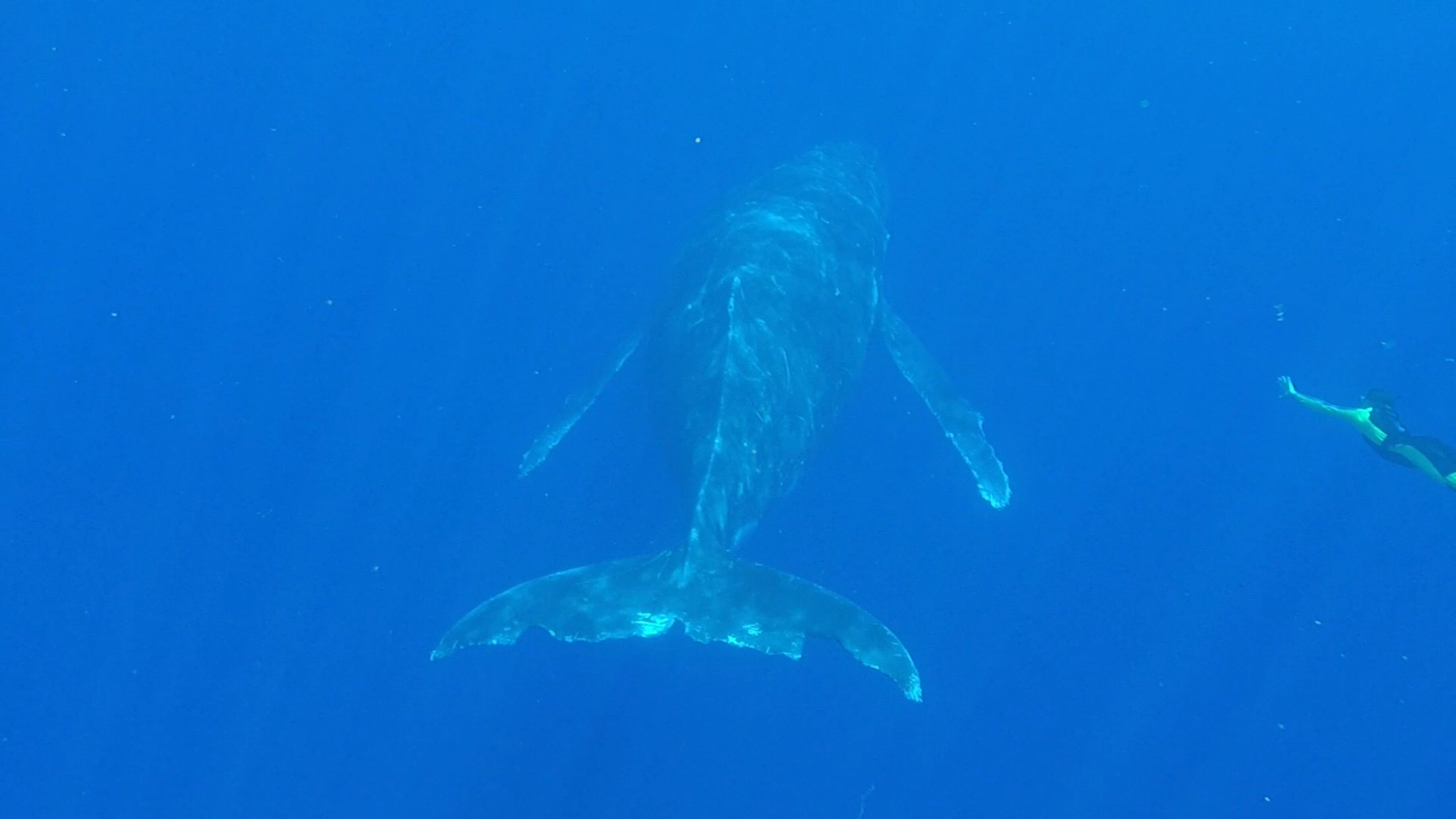 Our overnight passage to Huahine, the first of the Leeward islands was a fast and ‘sporty’ downwind passage. Huahine greeted us with a laid back and super-welcoming attitude, a local yacht club in Fare with $5 Mai Tai’s and $10 burgers, and some of the most beautiful anchorages we had seen yet. It was cool to look upon the same spots as 9 years ago with Delos – just as beautiful and mysterious as remembered. 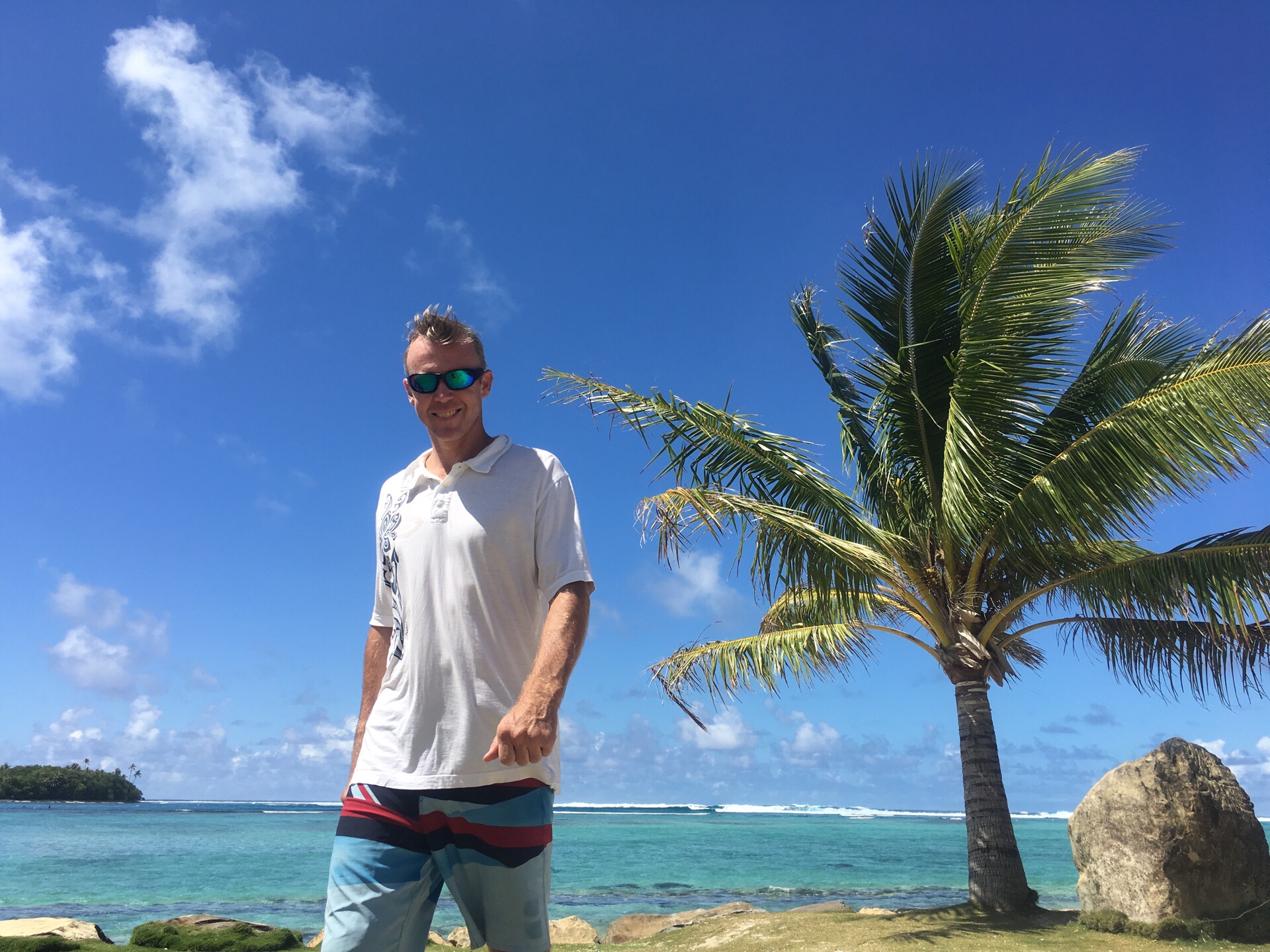 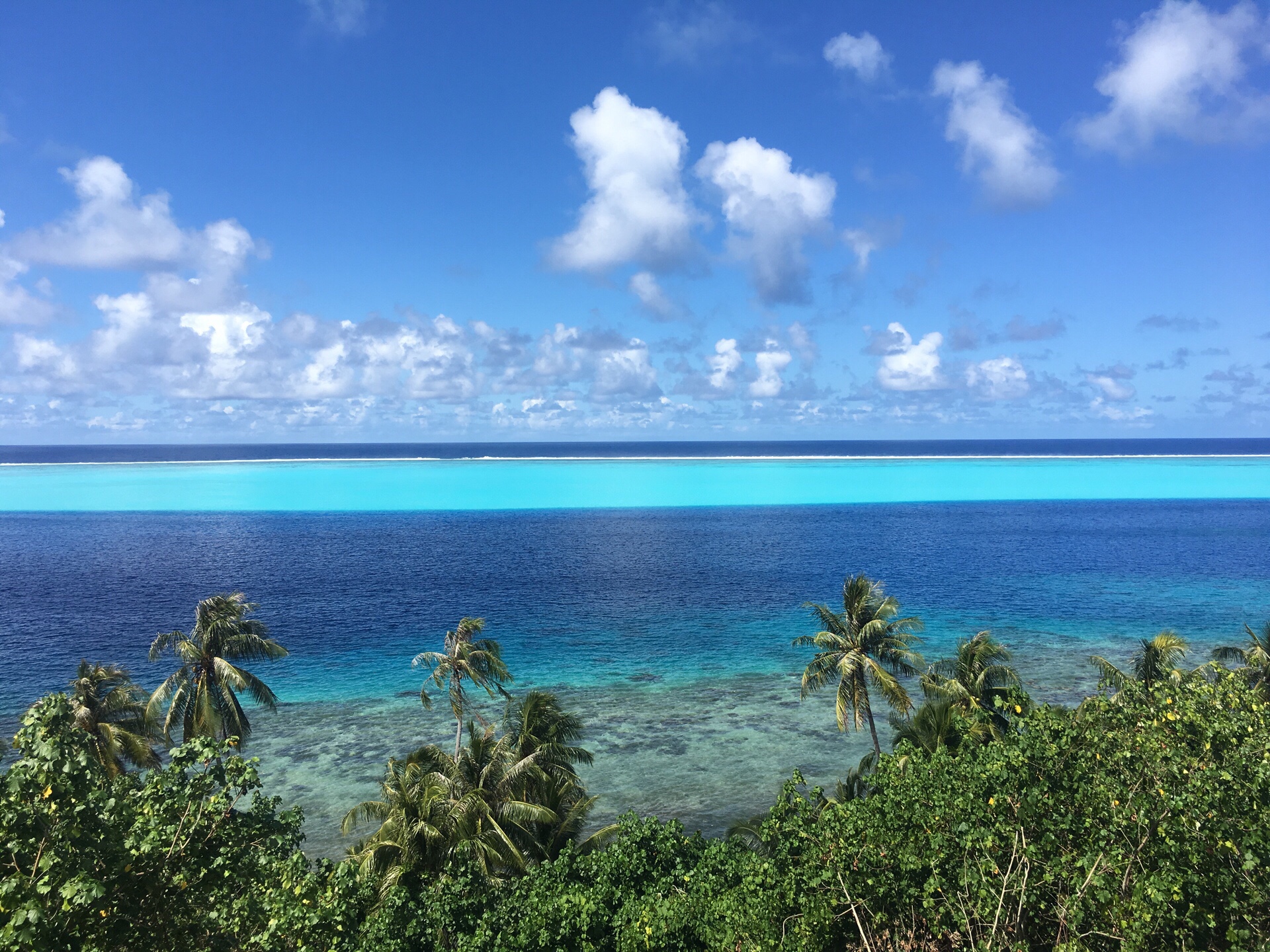 We took the obligatory tour around the island and learned about its rich history as the ‘Island of Chiefs or Ali’i’ with its many marae and dark human sacrifice history. We also got the first of what it was to be a series of bunches (literally) of bananas and papayas gifted to us after our tour, which put a bit of a dent in our ability to keep our usual low-carb. Bananas Daiquiris anyone? 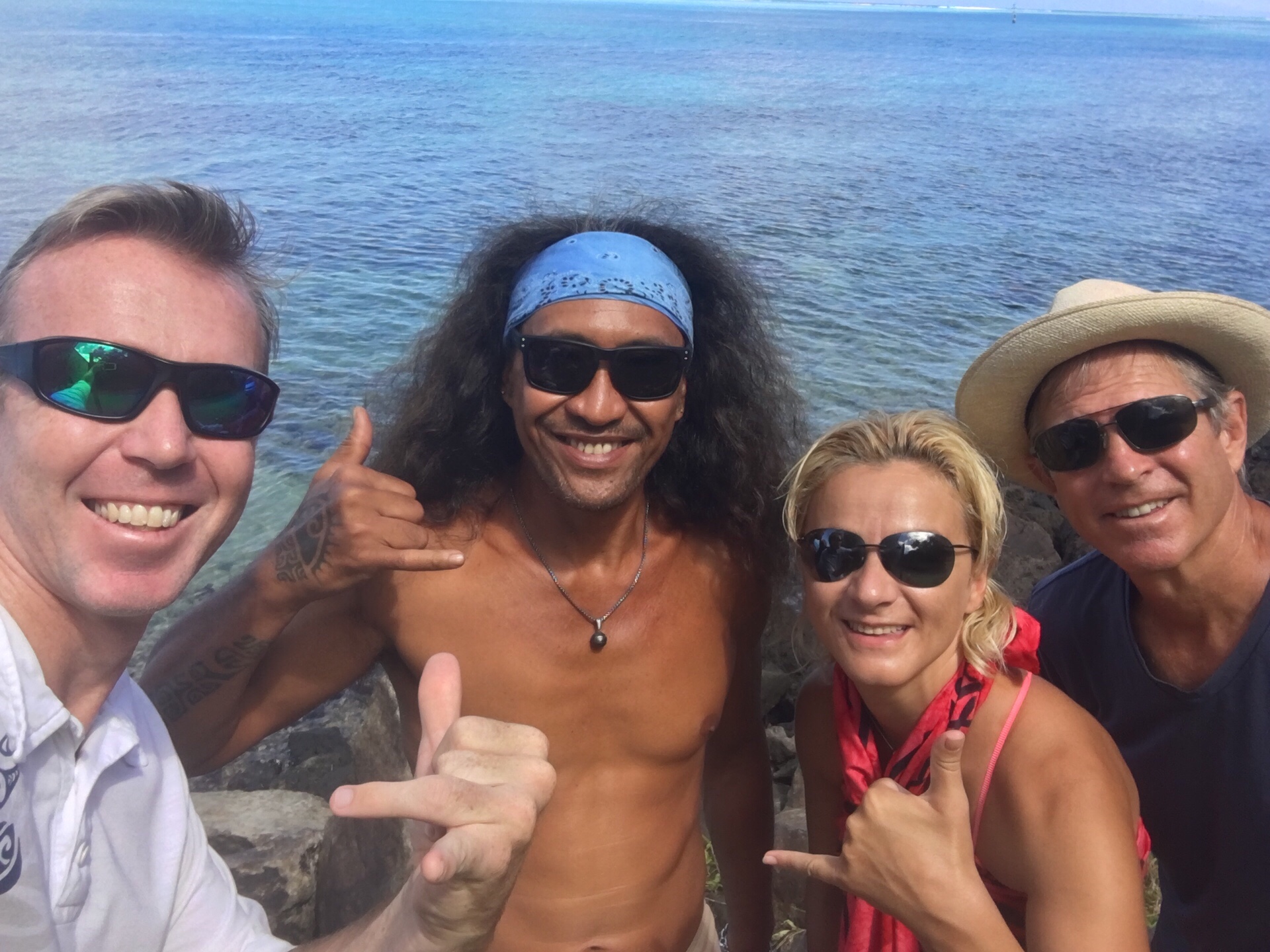 We were cruising in company again with our awesome friends from Sailing Aquarius, and we both headed next to Raiatea, where we toured the Taputapuatea marae sites and had a fun jungle tour featuring more bananas and coconuts. It was a bit muddy for my taste, but fun, and it reminded me why I love water so much: no dirt! The coconuts redeemed themselves once we filled them with lime and rum. Raiatea does not have good anchorages, everything is coral and deep and the only way to stop is to grab a mooring ball, which can be stressful since you are competing with all the charter boats that start in Uturoa. Thankfully quiet Taha’a is close by with a couple of gorgeous anchoring spots with white sand and more manageable coral heads. 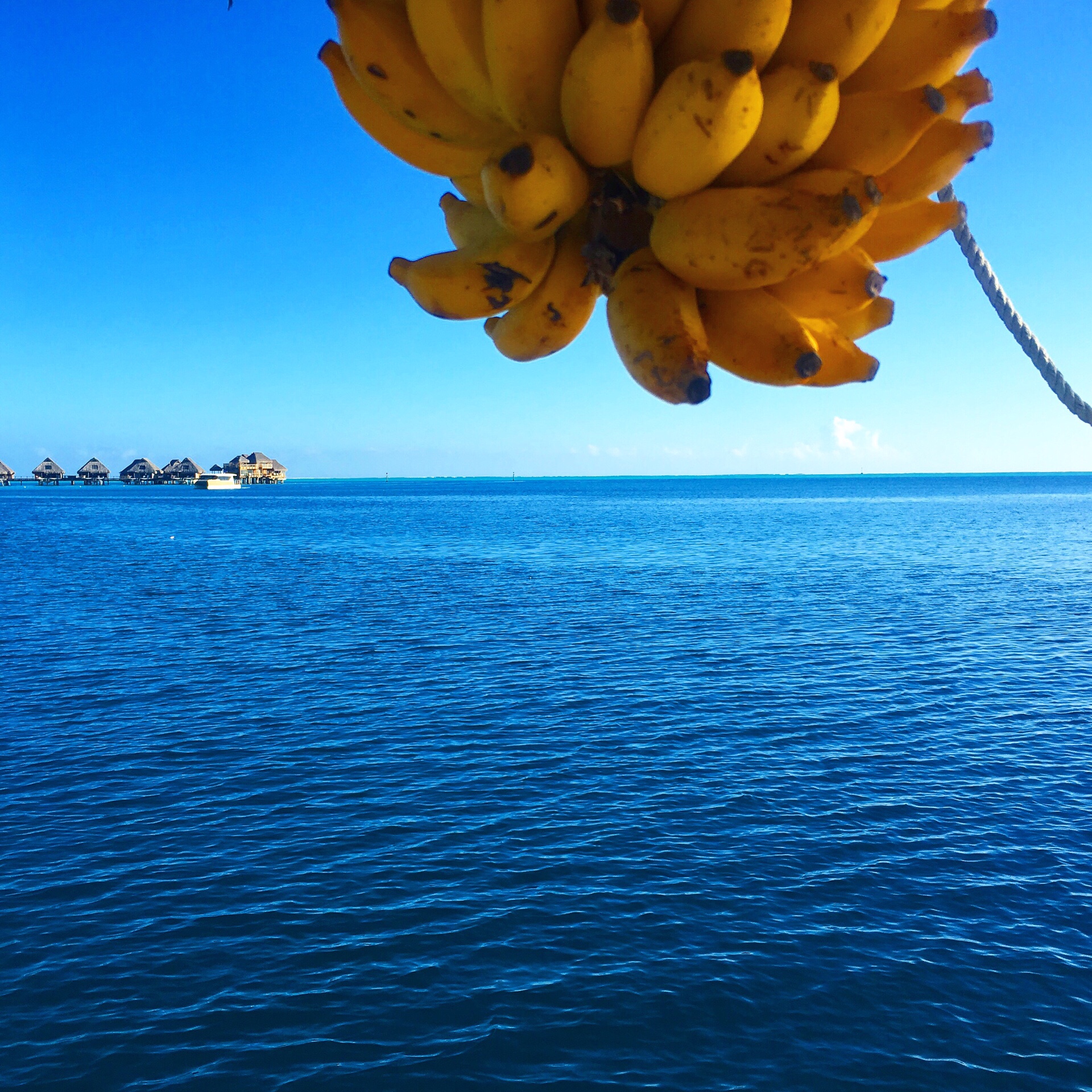 We stopped in a couple of places on Tahaa, once on the East side to wait for another weather system to pass, then on the West side by what is locally known as the ‘Coral River’ – a fun drift snorkel over healthy colorful coral and lots of fish which we decided to swim upstream for sport. We also had a ‘dinghy party’ with our friends on the shallow sand bank – think self-serve swim-up bar with colorful fishes. 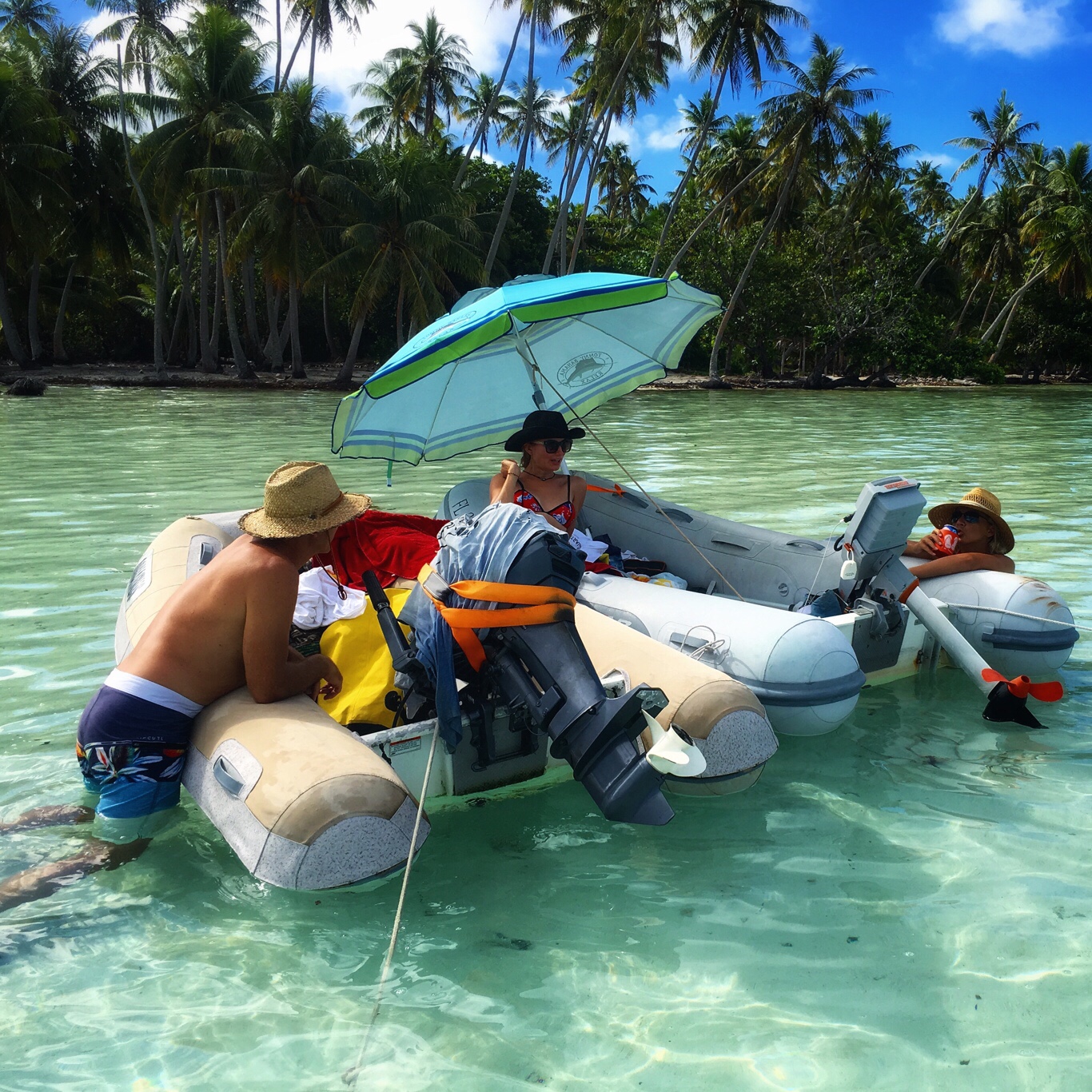 We arrived in Bora Bora and were not disappointed, it’s as gorgeous as I remembered it. I had heard cruiser reports of it being ‘spoiled’ or ‘not as nice as it used to be’ but we actually found it to be, once again, the most insanely beautiful place we had ever been with Bella Marina. It’s true that the vibe is not quite as quiet or friendly as Huahine, but everyone was super nice (especially if you use one or two Tahitian and French words) and we enjoyed a bit of action after a couple of very quiet islands. The Mai Kai yacht club had plenty of mooring balls where we stopped to provision, orient ourselves for a day, and sample their swimming pool. It was really more for the photo op than anything else, as the next anchorage we went to behind Motu Ta’apua had gorgeous, clear, warm gin water to swim in that was much nicer than the pool. 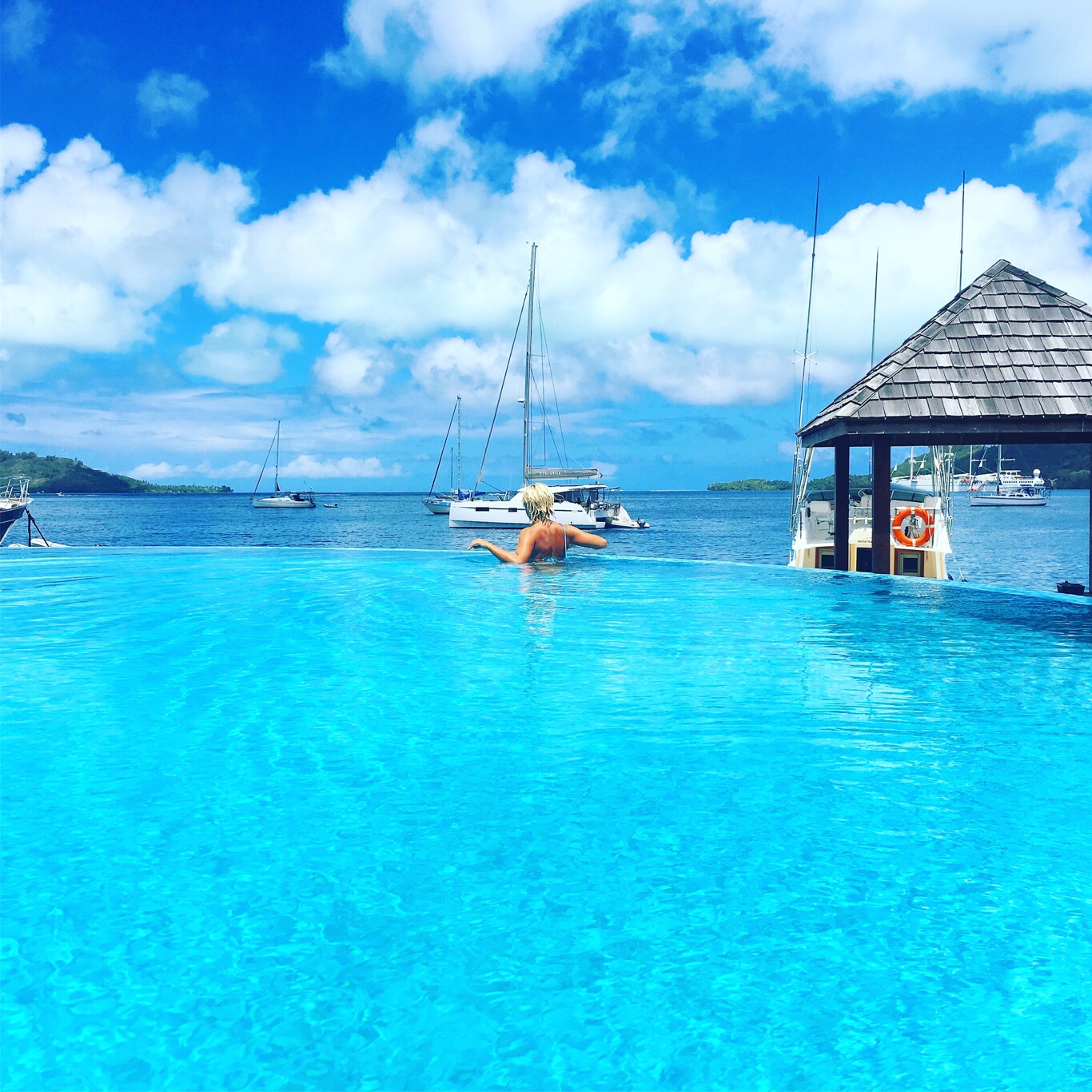 A month went by in a blink, filled with lots of swimming, wild encounters, sting rays and sharks, manta rays, incredibly clear snorkeling over gorgeous reefs and colorful fish, and a couple of Mara’amus. Tis’ the season… Oh, and the obligatory pilgrimage to Bloody Mary’s, which installed a bunch of mooring balls so it’s super easy to just ‘pull in’ with the boat now. 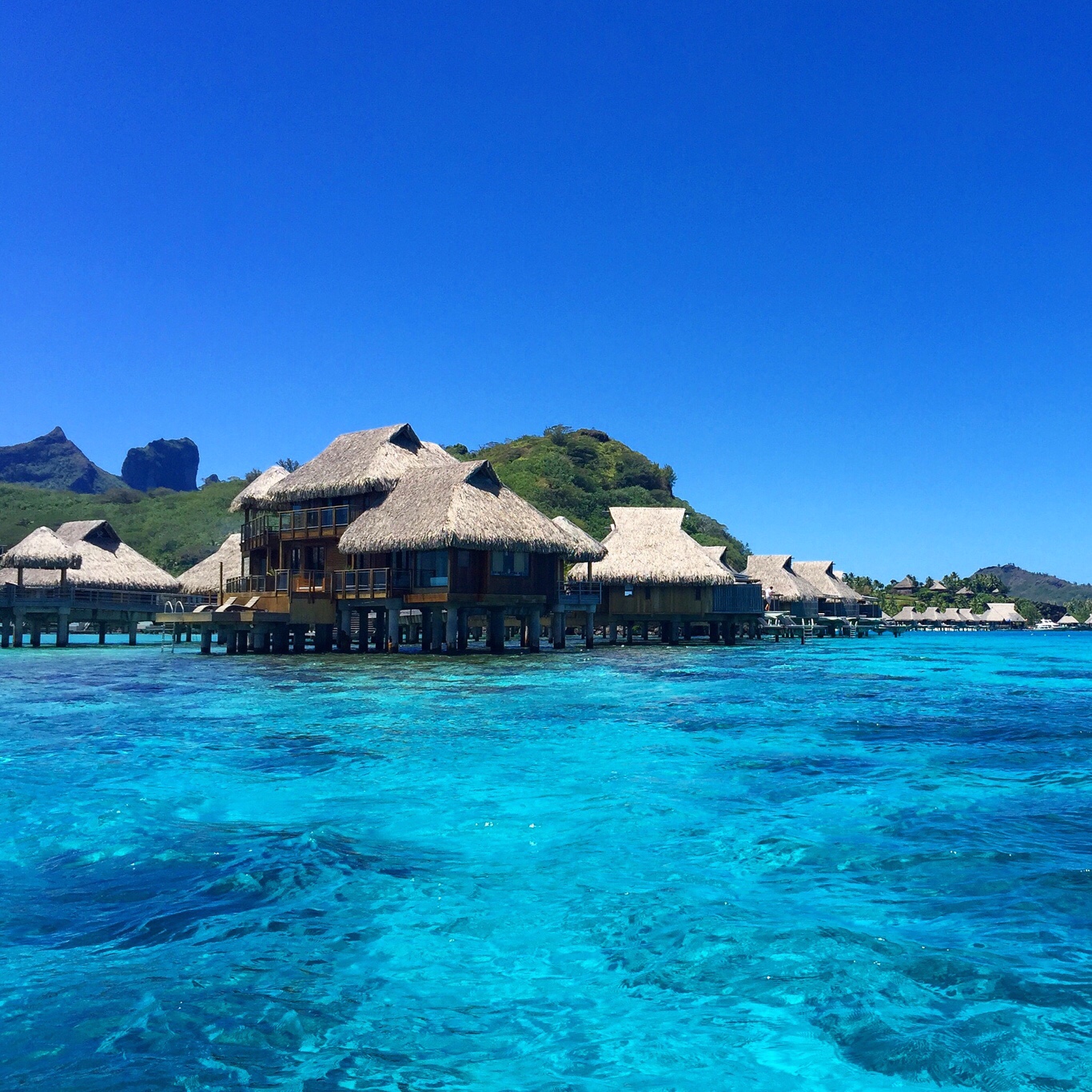 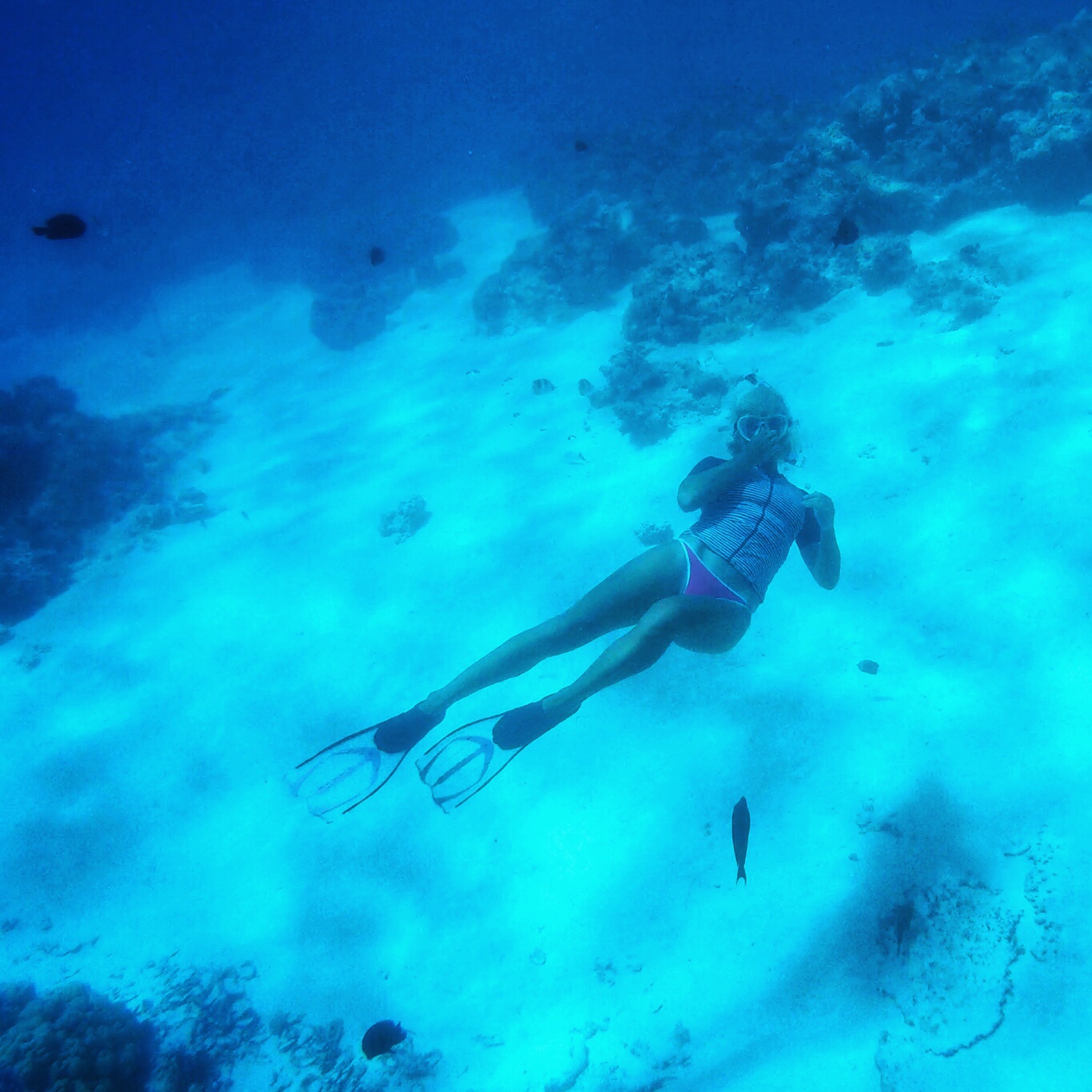 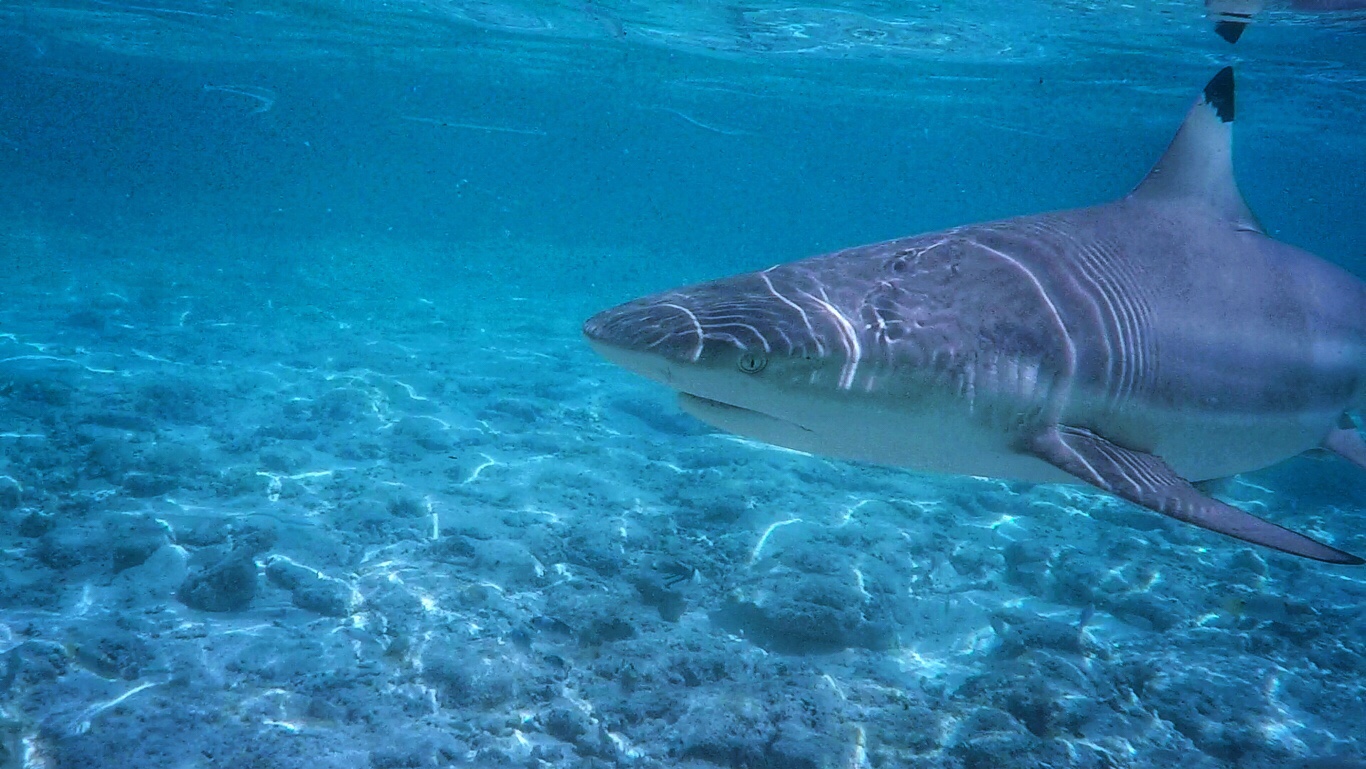 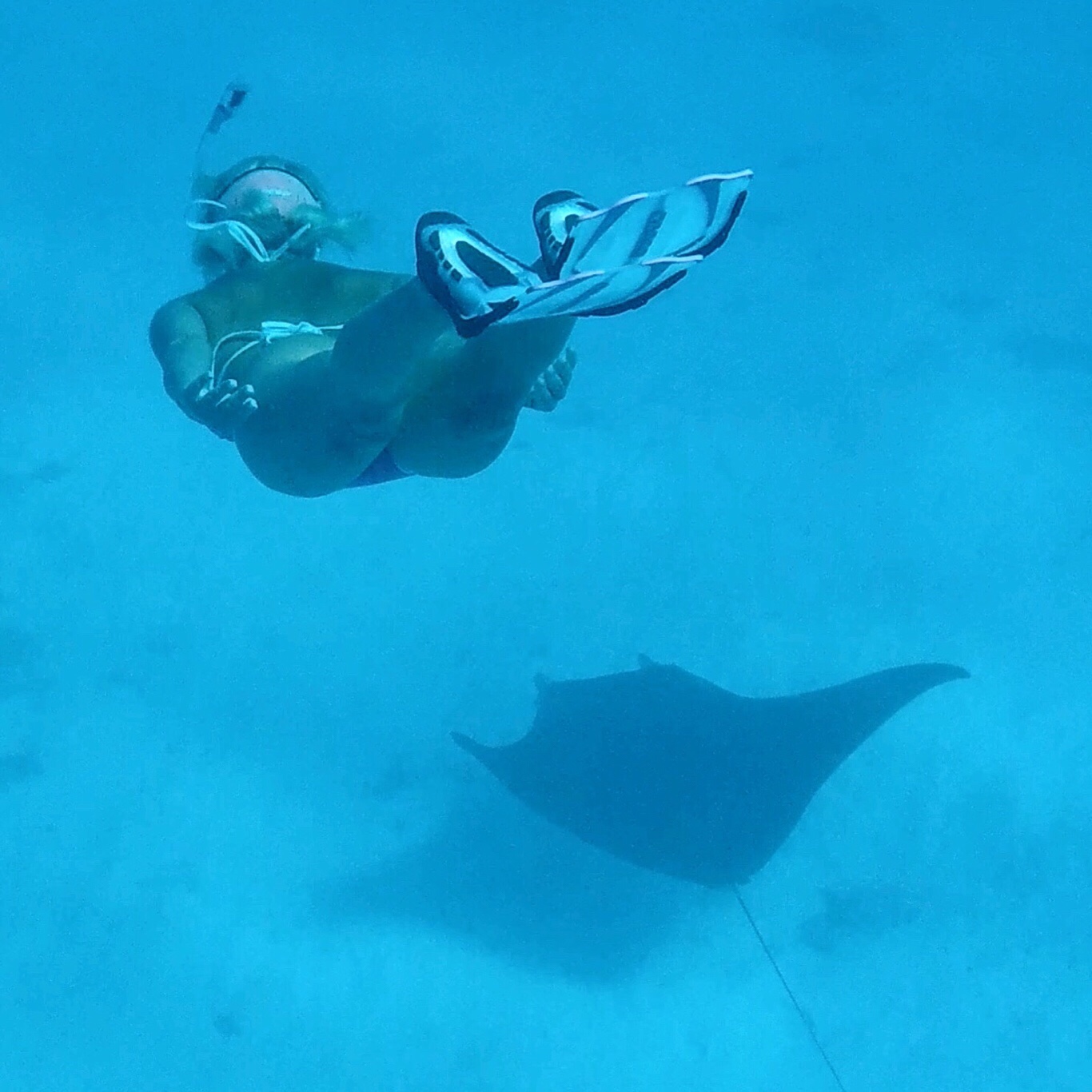 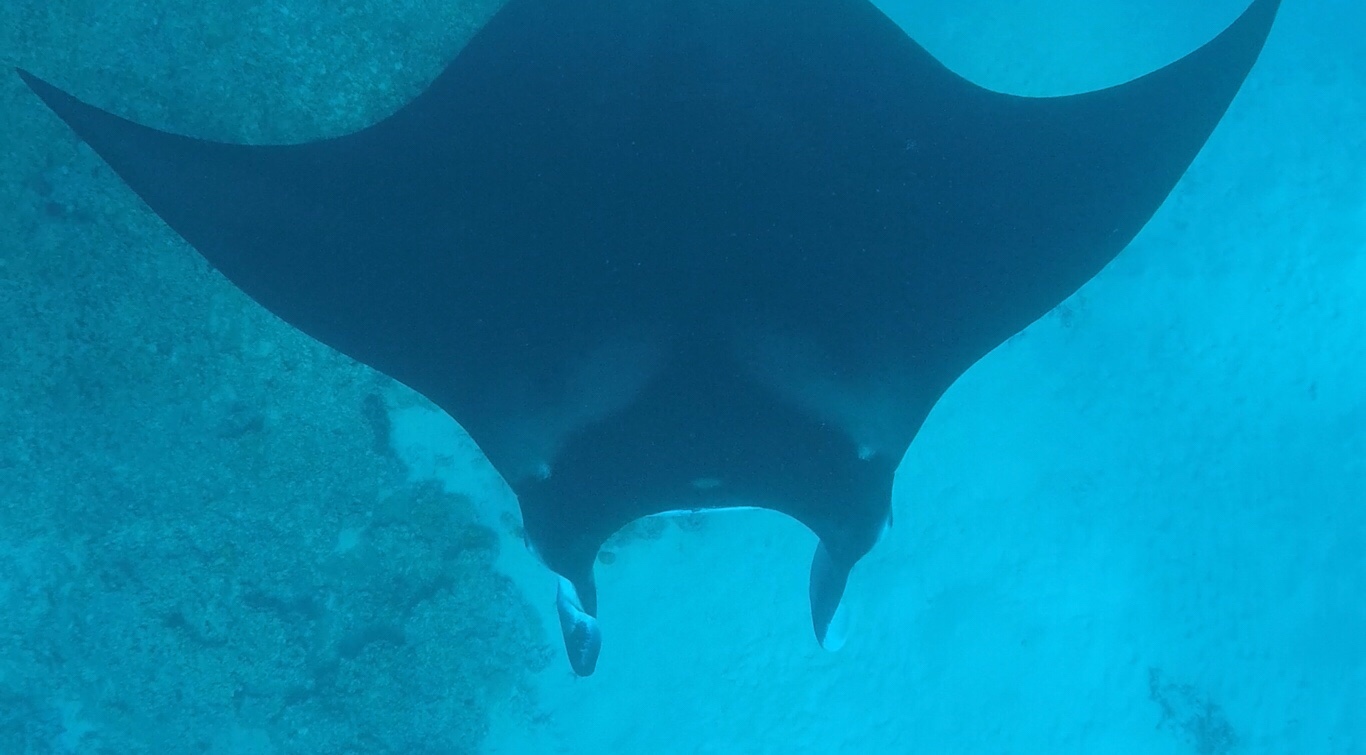 I was happy to see the coral reefs have been recovering since last time we were here in 2010, when they were bleached after a hurricane and overtaken by sea urchins. We spoke to some of the tour guides, who also happened to be marine biologists, and it turns our the island is investing a lot in conservation efforts, planting coral and limiting wild life interactions during the tours. The prices are as high as ever, which helps keep the number of tourists down and the quality of the lagoon waters up. It’s the coolest feeling to be anchored in your floating home in front of the thousands+/night bungalows. 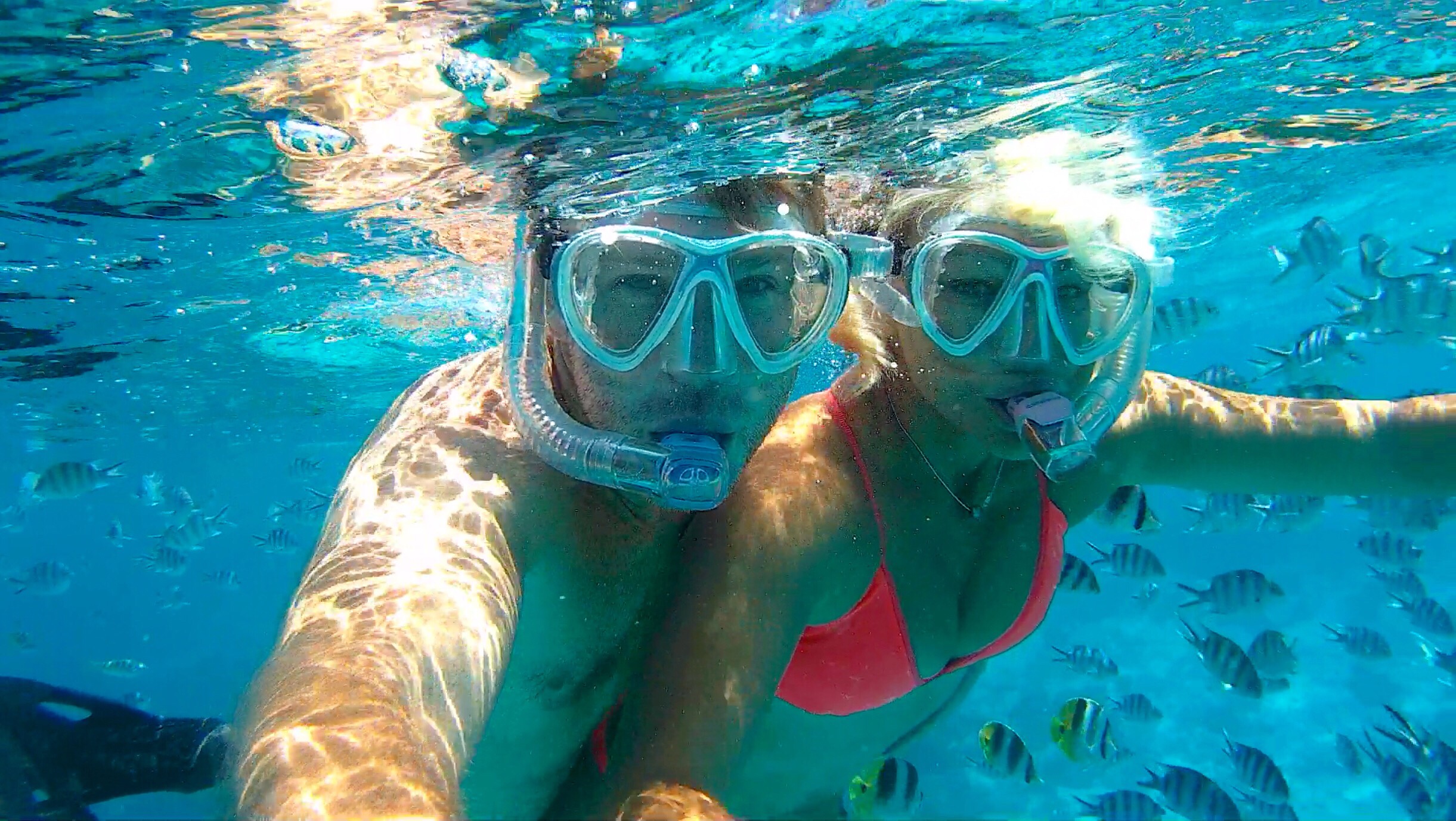 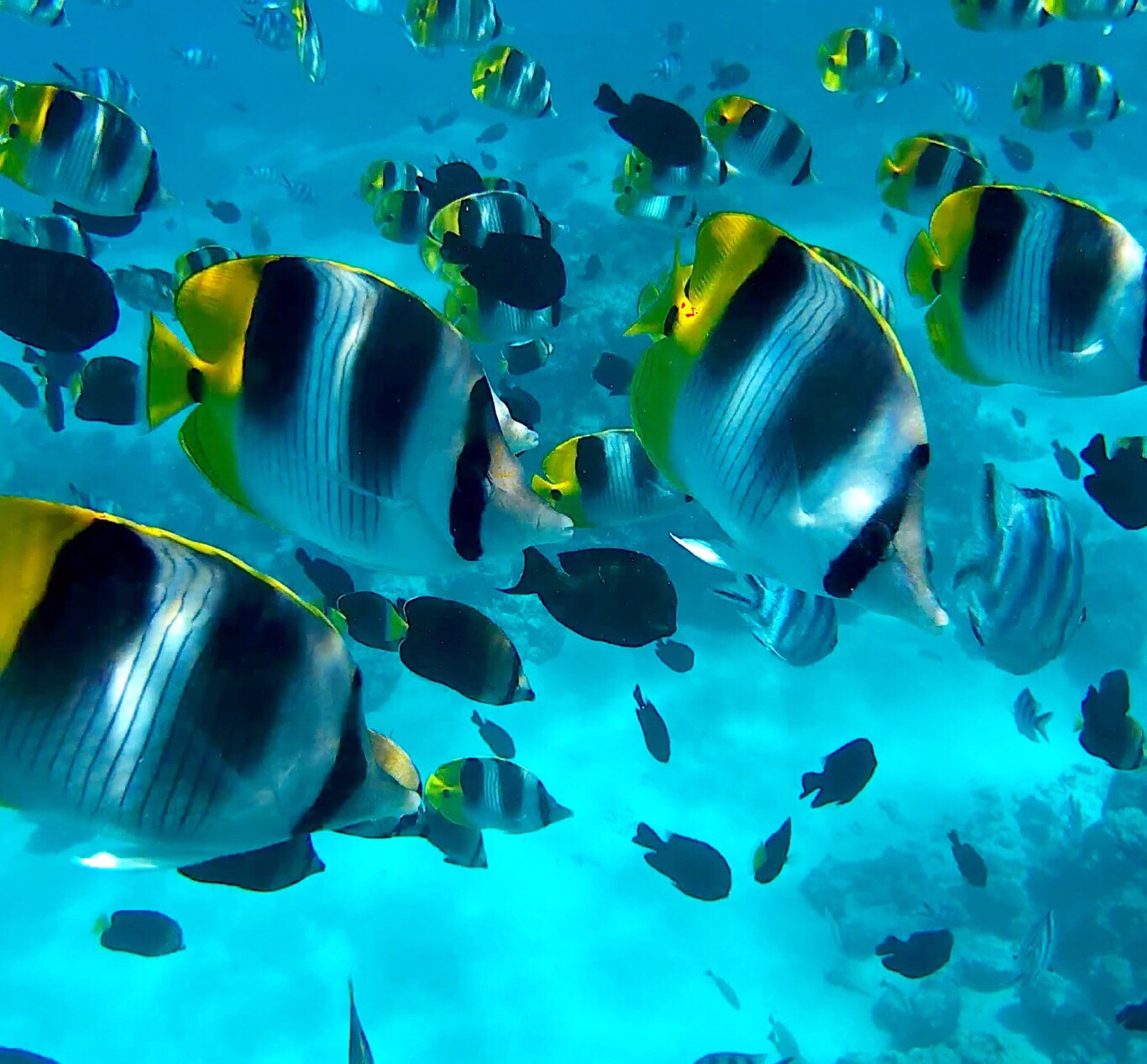 By the end of our stay in Bora Bora another set of friends on SeaWitch, one of the only powerboats cruising here this season, caught up with us, and we had some more rum filled coconuts and a circumnavigation of the island in their mighty powerboat dinghy. We visited the East side of the island which has some absolutely stunning clear shallow water dominated by the green peaks of Mt Otemanu, and hung out on Matira beach with some partying locals. 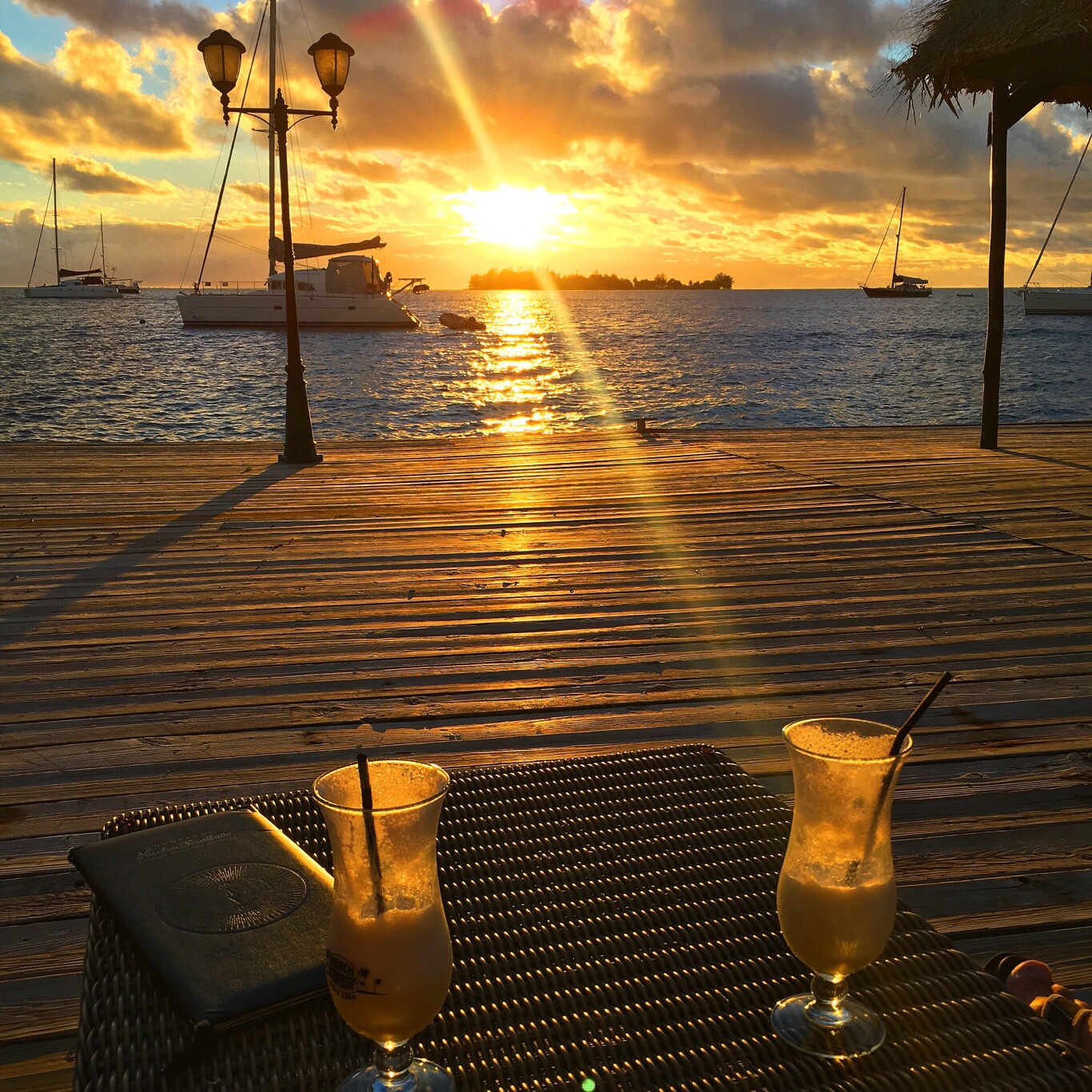 Alas, our time in paradise was drawing to a close and we took advantage of a couple of days of clear, settled weather to cross back over to Tahaa and then Huahine while our friends continued on to the Cook Islands and Tonga. We are now in Avea Bay, Huahine, waiting for the next weather window to make it to Tahiti or Mo’orea. 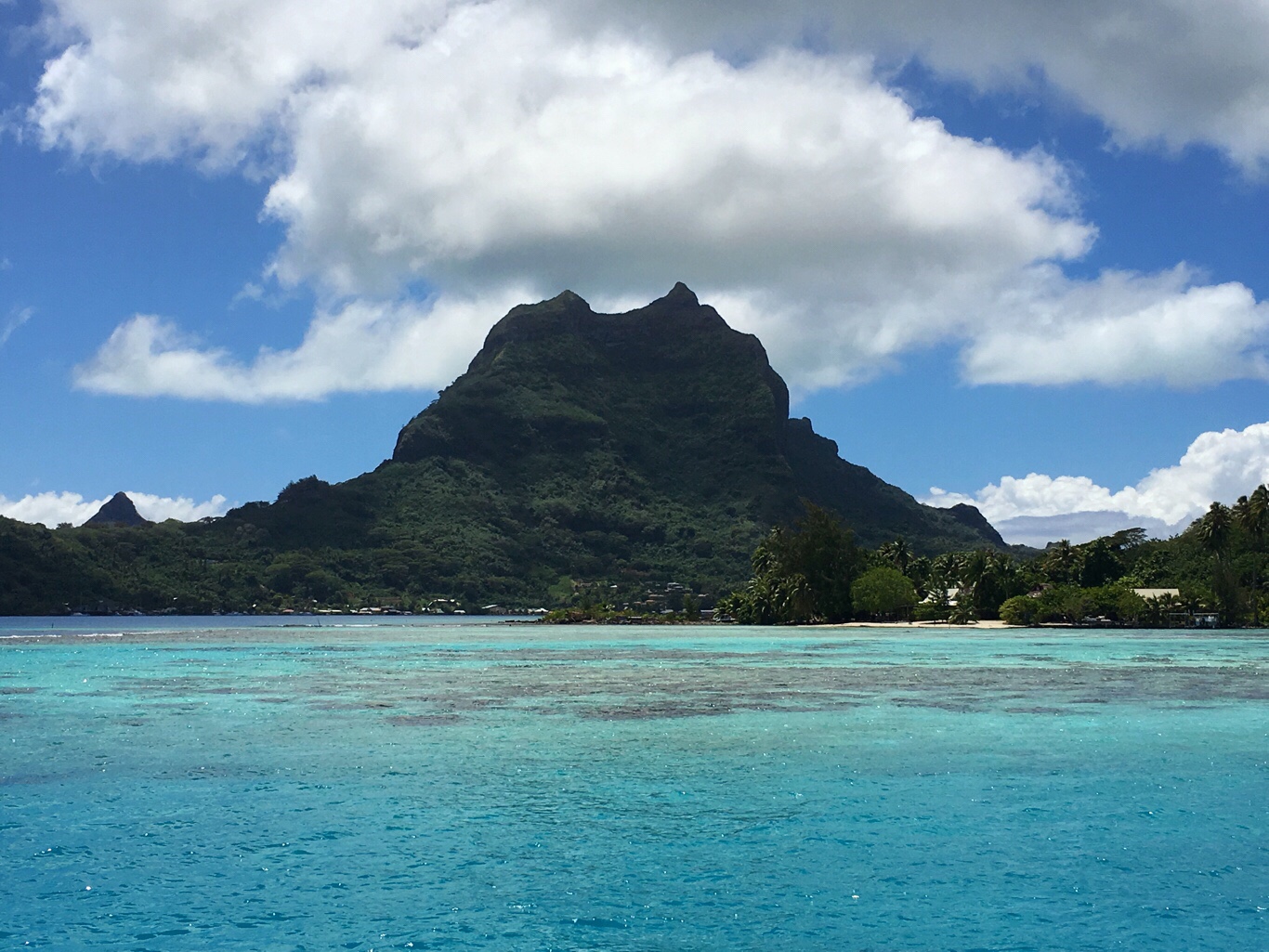 The Society Islands were as awesome as we expected, and we can’t wait to be back next season. Between the calm anchorages behind the reef, mild weather, and the abundance of good food, French cheeses and cold cuts, it will be hard to convince us to move on.

Aloha from Octavia and Petter!